The first of the programs to record gameplay that I suggest you pay attention to is Open Broadcaster Software, otherwise known much more simply as OBS. It is a free software, of an open source nature and available for PC and Mac. This program not only allows you to record gameplay by reviewing everything that happens on your computer screen but also to stream it and create recordings combined between desktop and webcam. 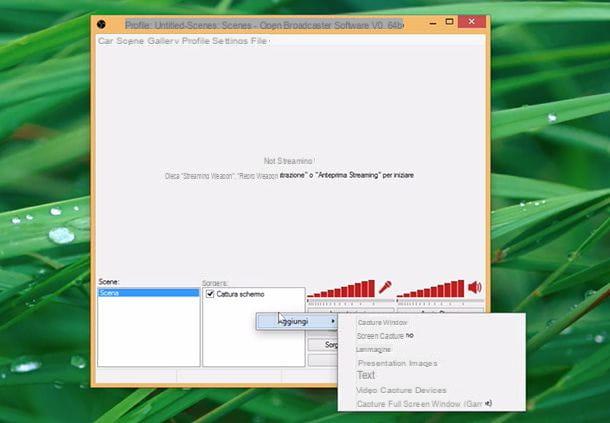 Open Broadcaster Software is a fairly simple program to use, it supports H264 and AAC encoding and allows you to save output files in MP4 or FLV format.

Camtasia Studio is another software that can fully fit into the list of programs to record gameplay. This is a resource also available for PC and Mac considered by all as one of the best programs at a professional level to record game sessions and online much more general to sign what happens on the computer desktop (if you remember well I talked about it in my guide on how to download Camtasia Studio). The program allows you to record high quality gameplay, to incorporate the webcam in your videos and to make changes to both the audio and video parts using a special editor full of all sorts of features. 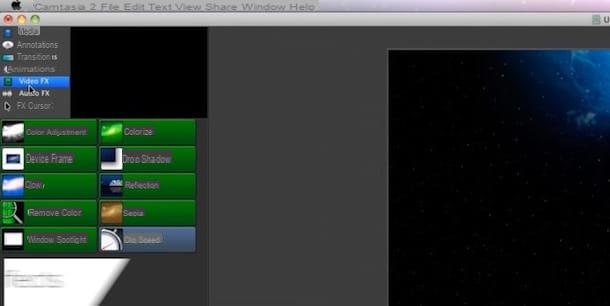 To be particularly interesting are the numerous effects that are made available to the user to allow the viewer to focus on a particular detail.

Camtasia Studio is a paid program available for both Windows and macOS. A trial version is also available that allows you to use the program free of charge for a maximum period of 30 days. To download Camtasia to your computer click here.

Another great program to record gameplay that I suggest you use is Fraps. This is a commercial software designed to film your gaming performance without negatively affecting the performance of the system and the games themselves, making the most of the potential of the computer in use but at the same time avoiding lag and problems of various kinds. 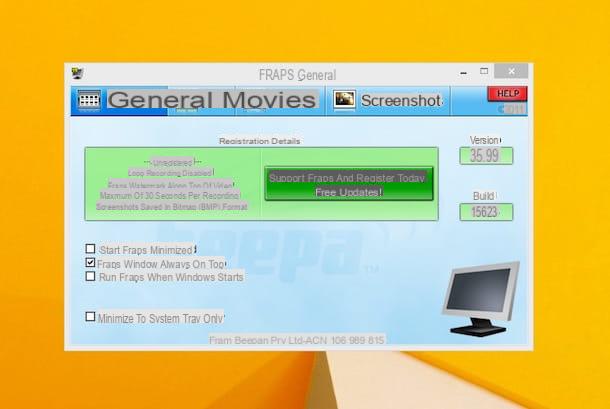 The program supports all the most modern processors and all major models of NVIDIA GeForce and AMD Radeon graphics cards.

Fraps is a program available only and exclusively for Windows operating systems. The software is for a fee but it is possible to download a trial version that can be used free of charge which allows you to make recordings with limited durations. To download Fraps to your computer click here.

If you have a PC and if the software already indicated was not to your liking, I suggest you contact Action to record your gameplay. It is a commercial program that allows both recording and real-time streaming of gaming sessions to the desktop. The program performs HD recordings to be saved in AVI or MP4 format. 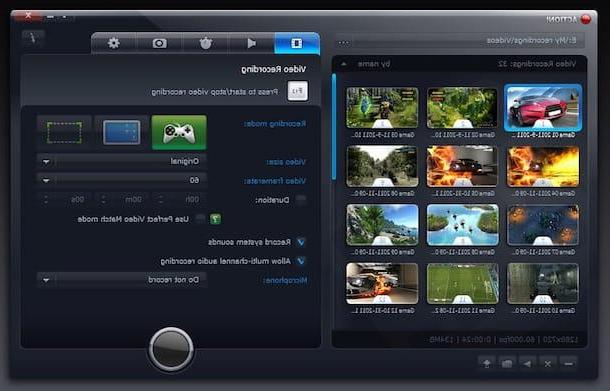 The program is very light, has a well-finished and decidedly inviting interface, provides the user with a whole series of ready-to-use recording formats, allows you to choose the positioning of the camera for shooting the angles of the game and it also allows you to apply stunning slow motion effects to your recordings.

Action is a software available only and exclusively for Windows operating systems. Furthermore, the program is paid but can be downloaded for free in a functional trial version without any type of limitation for a maximum period of 30 days. To download Action on your computer click here.

The excellent is also part of this list of programs to record gameplay LoiLo Game Recorder. It is a freeware software for PC that is extremely simple to use thanks to that it is possible to film your gaming sessions and which offers features similar to those of the aforementioned Fraps. The program supports the Motion-JPEG format which allows you to obtain the best balance in terms of the final quality of the video file and its weight. 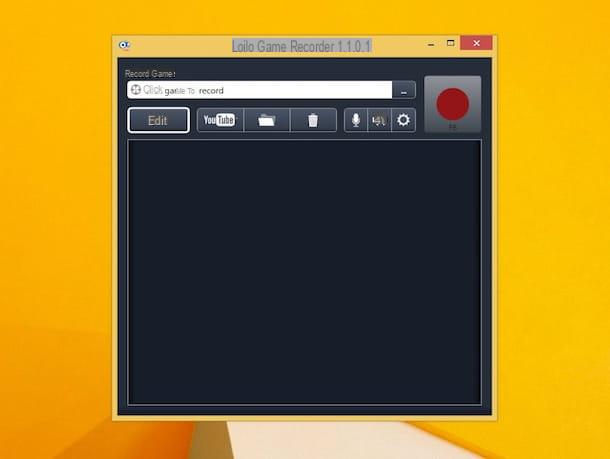 The software guarantees a loss of performance practically equal to zero, if necessary it allows you to record the voice and also allows you to immediately upload the gameplay directly to your YouTube channel.

Screenflow is another great resource to include in the program list for recording gameplay. This is a commercial software for Mac that allows you to film the screen, which does not excessively affect the performance of the system and which is extremely easy to use. 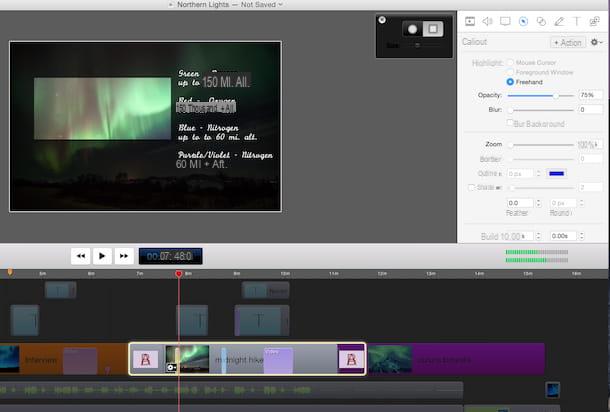 The pride of this program is the possibility that is offered to users to be able to edit and mount the recordings made in an extremely simple way thanks to the powerful editor included. The program also supports all major video file formats and allows you to record game sessions even on iPhone and iPad.

Screen flow is a software available only and exclusively for macOS, it is available paid but eventually it can be downloaded for free in one trial version which allows you to test all available functions for a period of 30 days. To download Screenflow to your computer click here. 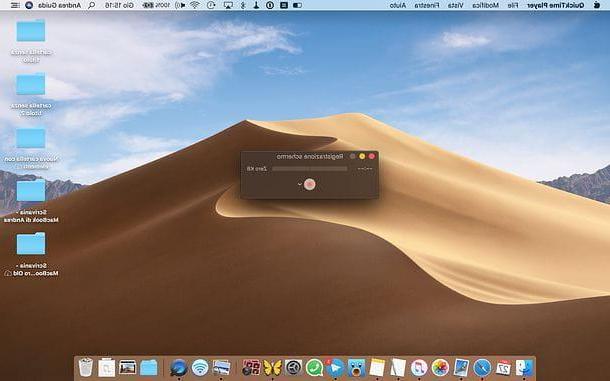 macOS offers several tools to record the computer screen, and consequently the gameplay sessions. One of them is QuickTime Player, the media player included “standard” on all Apple computers.

To record your computer screen using QuickTime Player, start the program in question, right-click on its icon in the Dock bar and select the item New screen recording from the menu that opens. Afterwards, press on Rec (in the pop-up window on the desktop) and choose whether to record the entire screen by clicking anywhere on it, or to capture just a portion of the desktop by selecting it with the mouse.

When registration is complete, click the button stop located at the top right (in the macOS menu bar), then moved to the menu File> Export As QuickTime and choose in which format to export the video. More details on the whole procedure can be found in my tutorial on how to record the Mac screen. 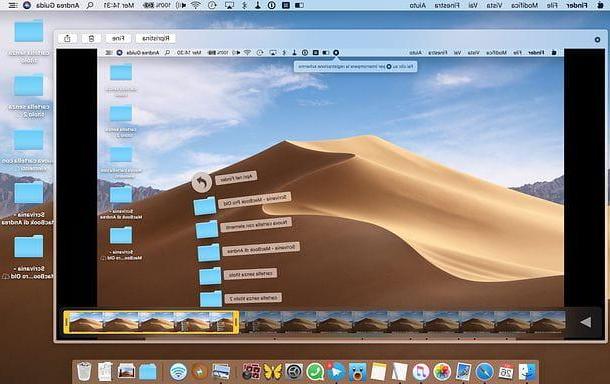 In macOS 10.14 (Mojave) and later, you can record your computer screen using the utility Screenshot, also integrated into the Apple operating system. To use it, press the combination cmd + shift + 5 on your computer keyboard and, using the toolbar that appears on the desktop, choose whether to record a video of thefull screen or just of a portion of it.

Then presses on the button Register, make your video and, when finished, press the button stop present in the menu bar (top right). If you want to edit or share the resulting movie "on the fly", click on its thumbnail that appears in the lower right corner of the screen and use the tools included in Quick Look. More details on the whole procedure can be found in my tutorial on how to record the Mac screen.