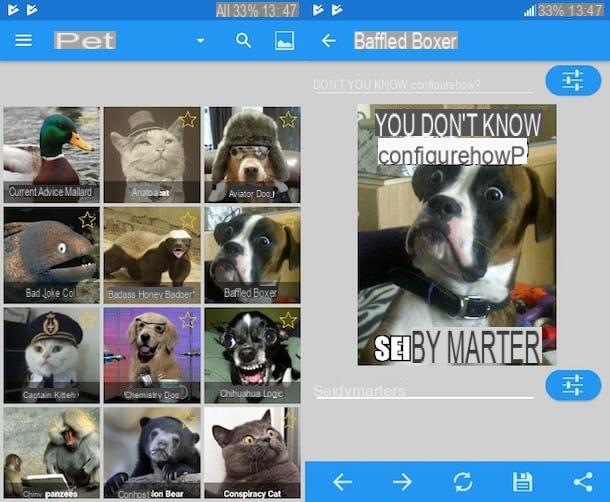 One of the best app to create memes on Android it is Meme Creator, a free solution that provides over 600 images, 20 different fonts and the ability to import images from your gallery to create funny and original memes even with your own photos.

After installing Meme Creator on your device, open the application by pressing the button apri or by tapping on its icon located on the Home screen of your device. Then tap on arrow pointing down and presses on one of the available categories (Pets, Celebrity, Advice, Cartoons, Rage, new, etc.) to choose an image to use for your meme. Alternatively, you can tap onphoto icon (top right) and import an image from the smm gallery.

To change the color and font of the text, press on one of the two icons with adjustment bars located near the options Top text e Lower text and, in the menu that opens, proceed with the desired changes. Then confirm everything by pressing the green button OK.

As soon as you are satisfied with the result, tap the button Save (the memory card icon) to save the meme on your device or, if you prefer, tap the button Share (the icon with the three dots connected together) to share it directly with your friends. 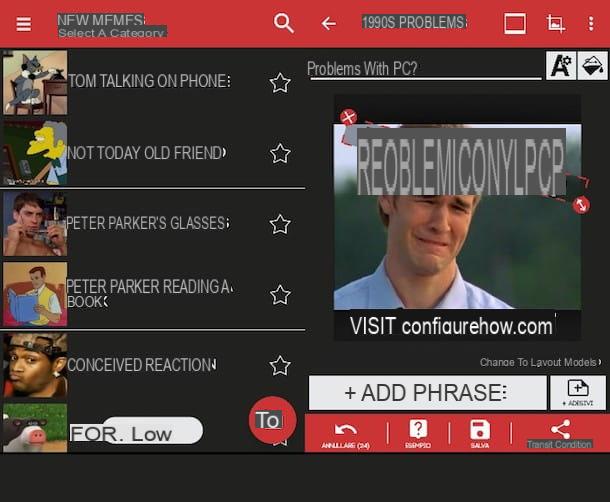 Meme Generator Free is another free solution that you should definitely try on your Android or iOS smartphone / tablet. This app, in addition to offering the possibility to use hundreds of images and import many more from your gallery, allows you to completely customize your memes with texts, stickers, borders and much more.

After downloading Meme Generator Free on your device, open the app and, on the home screen, choose one of the templates available to create your meme: Tom talking on phone, Not today old friend, Conceited reaction, etc. Alternatively, press the symbol ≡ and presses on one of the available categories: All memes, New memes, Popular memes, etc. to choose the type of meme to create.

After choosing the category you like best, tap on the options Click here to add text and type, on the keyboard of your smartphone or tablet, the phrase you want to use in your meme. After doing this, tap on the text you wrote and drag it where you want within the image. If you wish, you can also change the font of the text by pressing the button A and change its color by pressing onbucket icon.

If you want to add other phrases in addition to those you have already written on the meme, tap the button + Add phrase and type on the keyboard of your smartphone / tablet the phrase you want to insert in the image. To add a sticker, instead, tap on the button + Stickers, press on what you like best and place it where you prefer. 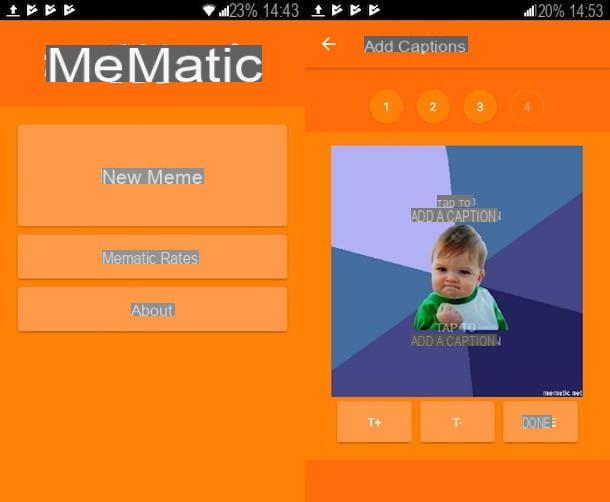 If the apps I have reported so far seem too complicated to use, try using off, a free app available for both Android and iOS devices that makes simplicity its main strength. Like the apps I have already told you about, Mematic also allows you to create memes using photos from the Internet and / or from your own gallery, but to do this you only need 4 steps: choose the image to use as the basis of the meme, choose the style to use, add the desired text to your meme and save or share the final image.

After completing the download of Mematic on your device, open the application, press the button New Meme and choose the image to use for your meme by selecting one of the three available options: Camera to take a photo at the moment, Album to take a photo from the smartphone gallery, or Popular to choose one of the many images made available by Mematic.

Now you should preview your meme: if you are satisfied with the final result, tap the orange button Done and, finally, presses on the command Save and share to save your “masterpiece” and share it with your friends. Did you see how simple it was to use this app?

The free version of Mematic allows you to have access to a limited number of styles and models. If you want to access the "full package", you have to buy the Pro version of the app which costs 3,49 euros. 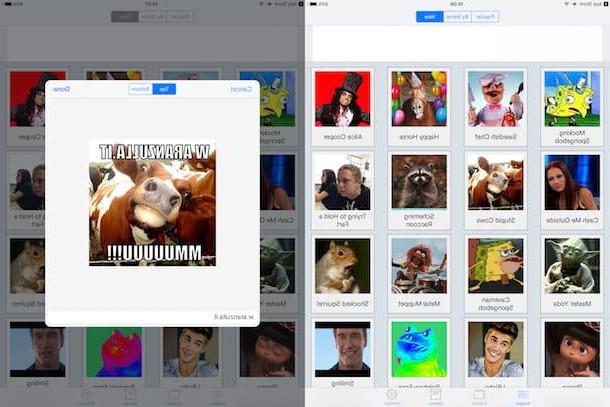 If you have an iPhone or iPad available, give it a try Meme Generator by MemeCrunch, a free app that is characterized by a “clean” interface and that allows not only to create memes in a few taps, but also to synchronize them between all your devices using iCloud.

To create your very own meme with Meme Generator by MemeCrunch, download the app on your device and, once the download is complete, start it. In the screen that opens, tap the button Popular (above) to use the most popular images among app users, press the button By Name (above) if you want to scroll through the list of available images based on their name, or tap the button New (above) if you want to check out the images that the developers of Meme Generator by MemeCrunch have recently added.

As soon as you are satisfied with the result you have obtained, tap on the button Done to save the changes made to the image and, in the box that opens, type the title of your “work”. Finally, confirm by pressing the button OK e premi sull 'arrow icon to save the image on your iDevice and / or share it with your friends!

Other apps to create Memes 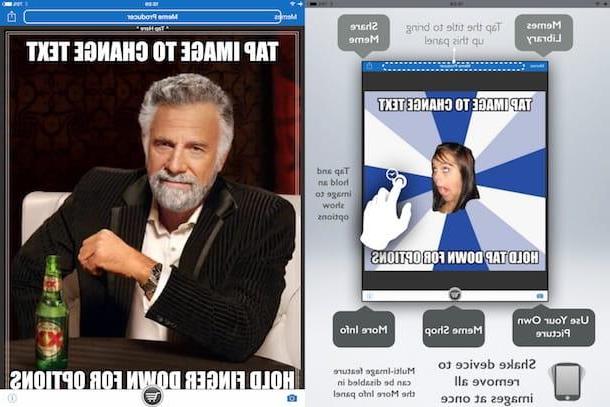 Le app to create memes that I have listed in the previous paragraphs are, in my humble opinion, the best on the square. Would you like to try others too? If so, check out the apps listed below as well, I'm sure they'll be to your liking!

On the net you can also find some online services to create memes from your computer. I already talked about it in the guide how to create memes: why don't you take the time to read this post too? I'm sure you will find it very interesting!