How to create a program

What is a program 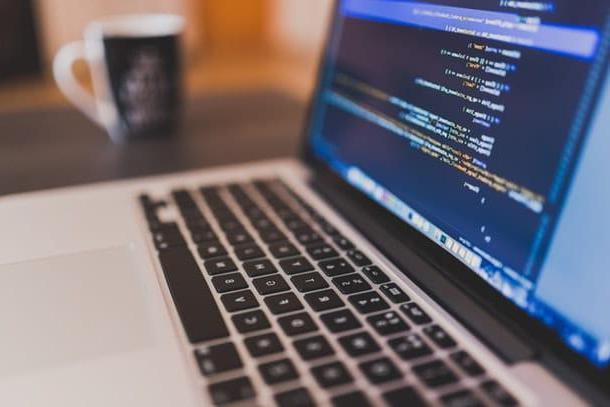 Before getting to the heart of the matter, I want to give you some theoretical information that will help you better understand the future steps of this guide: in practice, a program is a capable IT entity process data e aautomate operations. For example, there are programs that can process texts (such as Word), to perform calculations (such as Calculator Windows), to allow browsing on the Internet (such as i browser) and so on.

A program, depending on the task for which it is designed, can be more or less simple: just to give you an example, even the systems operational, designed to allow the user to interact with the "physical part" of a computer through dedicated software, they are in turn programs.

Within the programming, the above steps are expressed in the form of instructionsthe statement, given through a programming language: the complete set of instructions of a program is defined flow of execution, and it is what deals with processing the input data to transform it into what you want to achieve.

Stages of creating a program

Now that you have a clear definition of the program, it is time to get acquainted with how it is developed over time. It may seem strange to you, but even a program has a real one life cycle, structured in at least four phases: design, implementation, testing, release and and updating. Below you can find the details of each stage of this life cycle. 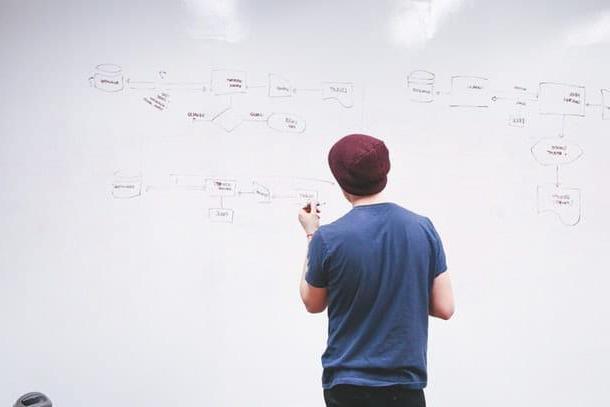 La design of a program is the first phase of its life cycle, as well as the most important: it is here that the objectives of the program are defined, the type of data it must manage and how it must do so. If you were to imagine a program as if it were a house, the design phase is the one in which the architect (or the team of architects) draws the project on paper, defining its shape, structure and position.

The design phase is usually the one managed by the engineers of the development team: just to give you some examples, there are those who define the type of data to be processed, those who develop the algorithm with which to manage the data themselves, those involved in studying the critical conditions (that is, events that should not occur, but could do so) and, why not, also those involved in designing the ideal graphic aspect of the program.

All these "ideas", at the moment purely abstract, are usually reported on gods diagrams or graphics developed through conventional standards (for example using the UML language) and must be approved by the figure of the chief engineer. In this phase, the programming language to be used to develop the software is also chosen. Once approval is received, all material is passed on to programmers, which take care of the implementation. 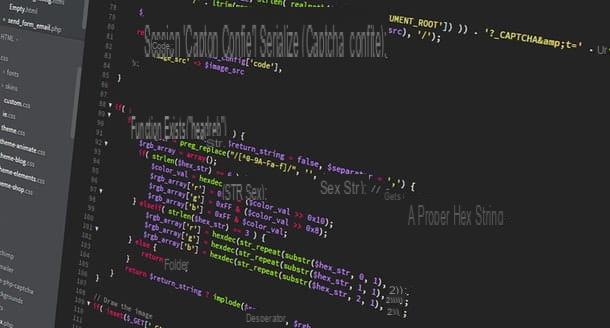 The phase of implementation is the one in which, in fact, the real program comes to life: one or more programmers participate in it (in the latter case, the team is coordinated by a chief programmer), in charge of writing in one or more files the set of instructions that form the flow of program execution.

Instructions are written within one or more plain text files, enclosed within a if necessary specific editor or a whole integrated development environment (in jargon IDE): these elements provide the programmer with useful tools to simplify the work, for example the possibility to automatically complete instructions, to suggest variables or, again, to define pieces of code to be recalled with precise keyboard combinations.

The set of files that contain the instructions written in the programming language is defined source code of the program. Over the course of the implementation, the “in-between” parts of the source code come compiled to be “translated” into machine language and be executed: in this way, the programmer is able to test the goodness of his work and to verify that the program behaves correctly.

Once the entire source code has been written, it is compiled to run through the operating system, thus becoming a real program (like the ones you are used to using on your computer): the implementation phase is completed, the result it can undergo a further testing phase or be directly released to the public. 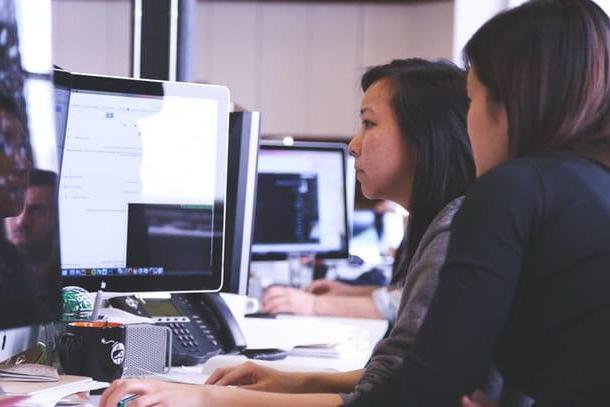 The phase of testing, in some respects, it can be considered the most "fun" phase of the life cycle of a program: in it, in fact, the appropriate figures of the team (the so-called tests) have the task of voluntarily causing malfunctions or critical conditions not managed within the program, so as to be able to reveal the bug (i.e. programming errors) and allow developers to remedy them.

The test categories to which a program can be subjected are really numerous and can test different aspects: even if it might seem strange to you, the testing phase is extremely important for the quality of a program, since it is in this that the any errors resulting from the previous phases. If you are interested in learning more, I refer you to the exhaustive entry on Wikipedia that deals with this topic in detail.

In some cases, the software house may decide to ask "help" from the end users to whom the program is dedicated, releasing an incomplete version for testing purposes: in this case we speak of alpha version o beta version of the software. The end user is asked to try the program and report any problems encountered to the manufacturer: in jargon, this procedure is called feedback.

At the end of the test phase, two things can happen: if the program has problems, these are reported to the development team, which takes care of solving them by modifying and updating the source code. If, on the other hand, the program has no problems, it gets the OK for the phase release. 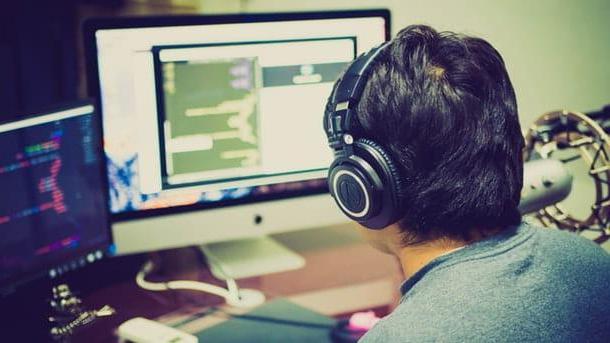 The phase of release of a program is one in which the latter is distributed to the public, free of charge, or made available for purchase, if the software is designed to operate after purchasing a license.

For market needs, or for the simple evolution of times, the software house can decide to add new features to the program, to modify its graphic appearance or to change its dynamics in whole or in part: in this case, a new version of the program is screened and re-runs through the entire life cycle process.

When the updated source code passes the testing phase, it is made public or marketed as updating of the original software.

A program ends its life cycle when the company behind it definitively stops updating it, effectively leaving it to itself: once development is stopped, the program is said to is no longer supported (discontinued in English). 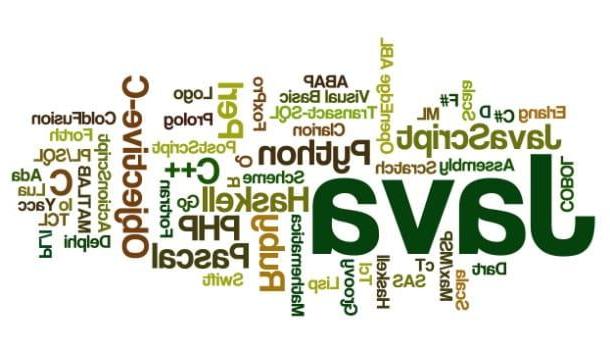 As I have already mentioned to you a moment ago, the programming language is the set of syntactic and logical rules used to structure instructions within the source code of a program.

The end user of the software, that is, those who use it every day for production, may have no idea of ​​the programming language used to develop the software itself, but you should know that not all languages ​​are the same: some are more suitable for building programs that work from the command line, others are better for managing graphical interfaces, still others are dedicated exclusively to processing calculations, designing games and more.

Here is a list (very limited, considering there are hundreds of them) of the most popular and well-known programming languages ​​currently available.

In the next section, I'll teach you how to design a simple C language calculator, which you can use from Command Prompt or from terminal macOS / Linux. 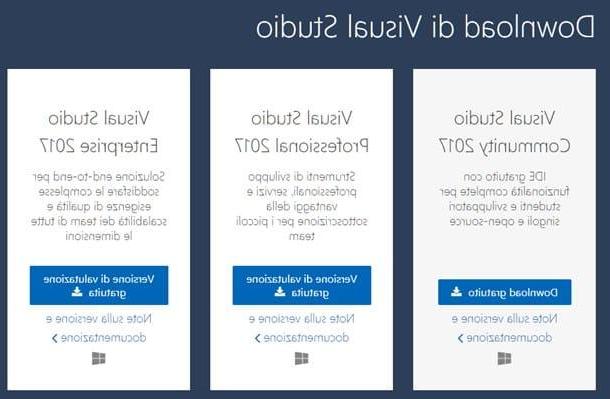 If you have made it this far, it means that you have learned all the theoretical notions on what concerns programming and that, finally, you are ready to get to work. Clearly, in this section, I will teach you how to create a very simple program, not designed for "global" distribution, and which therefore does not need to go through all the steps I explained to you earlier. All this will just build a small source code file and compile it using the most suitable compiler.

Simply put, at this stage you will learn how to create a simple one calculator in C, which you can use at your convenience via the Command Prompt Windows or the terminal macOS / Linux. The latter operating systems are already set up for managing files in C; for what concerns Windowsinstead, you need to install the component Visual Studio Community.

To proceed, connected to the dedicated website, click on the button Free download placed inside the box Visual Studio Community. Then open the downloaded file (eg. vs_Community.exe), presses the button Continue, put the check mark next to the item Desktop application development with C ++ in the window that appears, then in the box C ++ / Cli support located on the right and, finally, click on the button Install. When the procedure is complete, close the setup file window. 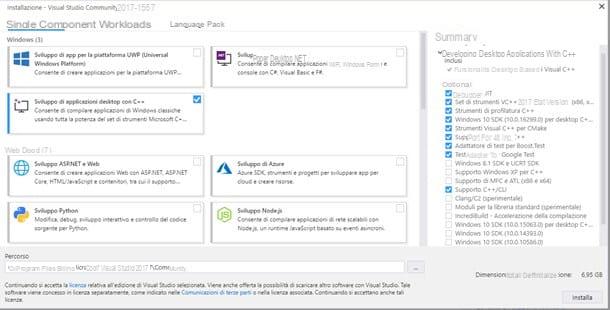 Now that you have all the tools you need, it's time to develop the source code of your program following the instructions that best suit your operating system. To start with, create the file that will contain the source in one of the following ways.

Once you open the text editor best suited to your operating system (eg. Block notes for Windows, Xcode for macOS or Gedit for Linux), type in the following code (exactly as shown below). I have decided to include in the source a brief description of each statement: the descriptions will not be read by the compiler, as they are preceded by symbols // (in jargon, this is Comments).

Once all the text is pasted, save the previously created file, then quietly close the editor. 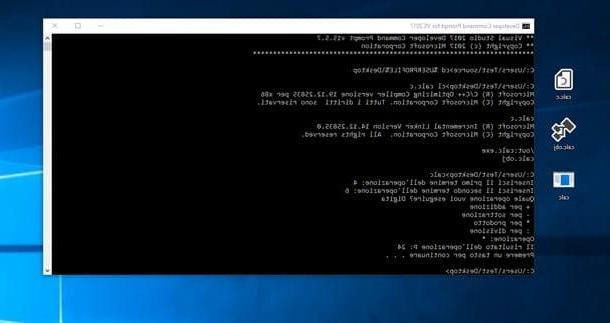 At this point, you can proceed with the compilation of the program using the instructions best suited to your operating system.

In this chapter of the tutorial I explained how to create a very simple program without a graphical interface, however the power of the various programming languages ​​is limitless and software complete with graphical interface can also be created: everything is in the skill and in the fantasy of designers and programmers. 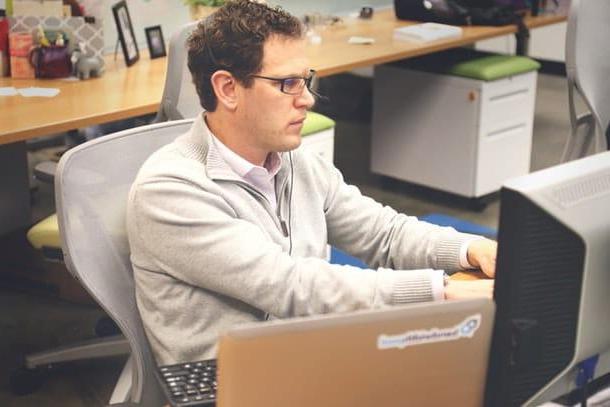 As you have noticed, create a program it is not a feasible operation, provided that you know at least one programming language: the source code of our calculator was very, very simple, but I'm sure it helped you to understand roughly how the instructions are structured (statement ) of a programming language.

Wait, are you telling me that this fascinates you a lot and that you intend to continue your studies to become a programmer? Perfect! I am happy to help you by suggesting resources available on the Internet that will be very, very useful to you.

How to create a program

add a comment of How to create a program