How to create QR code

How to create QR code on computer

As I mentioned in the introduction, there are numerous online services that allow you to create QR code on computer. Let me explain in detail how some of them work, which, in my humble opinion, are among the best on the square. 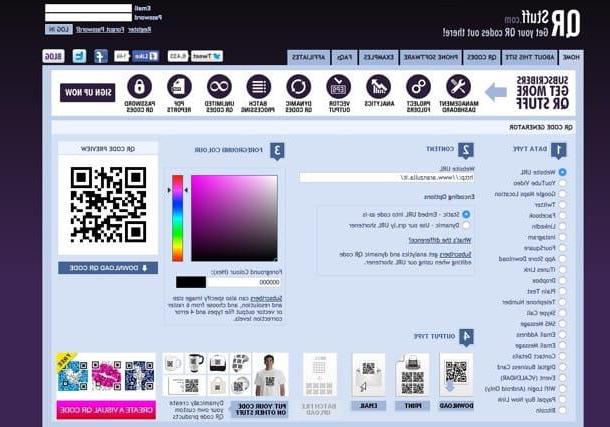 If you want to generate a QR code using your computer, you can take advantage of online services such as QR stuff. This service allows you to create QR codes with web addresses, personal information, wireless network passwords and simple texts for free. It also offers paid plans for the creation of dynamic QR codes, or "special" codes whose content can be updated at any time without generating a new QR. QR Stuff's paid plans start at $ 7,50 / month.

To create a free QR code with QR Stuff, connect to the home page of the service and, from the left sidebar, select the type of content you want to include in your code: website URL for a website address; Plain text for plain text; Contact details for a complete business card; Wi-Fi login for access credentials to a wireless network; Events for details of an event and so on.

Then fill out the form that is proposed to you with all the information you want to include in the QR code (eg.URL of your website), select the color that your code must have from the virtual palette (located on the right), press the button Style your code to change the design of the code (for example by attaching a logo or changing the appearance of the squares that compose it) and presses the button QR code download to download the file PNG on your computer. Simple, right?

Another service I recommend you try is goQR: allows you to create static codes containing URLs, simple texts, contacts, Wi-Fi passwords and other data. It works great on any browser, you don't need to register to use it and it's free.

To use goQR, connect to its home page and click on one of the icons on the left to choose the type of content you want to include in your QR code: the icon of the Land to create a code regarding a website address; there handset to generate one concerning a telephone number; L'little man to create a virtual business card; the padlock to generate a code containing a password for wireless networks, and so on. Next, fill out the form located in the section 2. Contents entering the information necessary to generate the code and then presses the yellow button Download placed immediately below the preview that appears on the right.

Now, fill out the form that appears in the center of the page to type the content to be included in the QR code and customize the colors (Foreground for the one in the foreground and background for the one in the background), the thickness of the edges (Border) and dimensions (Size). As soon as you are satisfied with the result, choose in which format to download the QR code on your computer between PNG e JPEG and the download will start automatically. 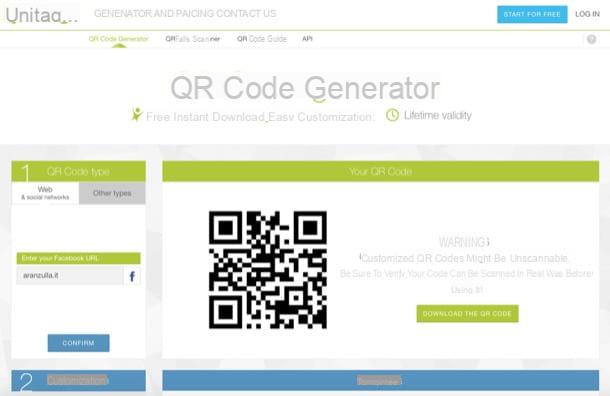 Unitag QR code Generator is another online resource that can come in handy for generating QR codes. It allows you to create static QR codes completely free of charge but, if you need to generate dynamic codes, you can subscribe to the Premium version of the service, which starts at $ 100 / year.

Under the box Customizationinstead, there are buttons through which you can customize the design of the QR code, such as the template basic colors (Colors), the look (look), adding an image or logo (Logo), etc. As soon as you are satisfied with the work done, you can download the code generated by Unitag QR code Generator simply by pressing the button Download the QR code, then pressing on the voice Next and finally on QR Code Download.

How to create QR codes on smartphones and tablets

You want to create QR Code directly from smartphone or from tablet? I don't see what the problem is: there are tons of apps that allow you to do this. Take a look at the ones listed below and then use the ones that seem best suited to your needs. 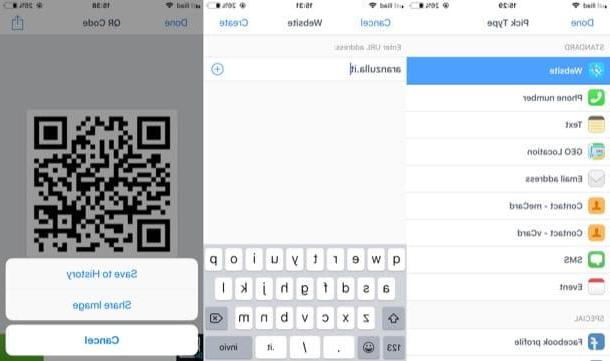 One of the most popular apps for creating QR codes is QR Reader. Don't be fooled by its name: while it's a great QR code reader, this app for Android and iOS also doubles as a code generator. The app is free, but to take advantage of the Premium features regarding the creation of QR codes, such as the one that allows you to change the color of the squares that compose it, you need to purchase the Premium version, which costs 3,49 euros.

In the screen that opens, then choose the type of QR code you want to create (eg. website, phone number, Text, etc.), fill in the form that appears on the screen to enter all the information you want to include in the QR code and press on the items Create e Custom to preview the code.

At this point, if you wish, choose the background color (Background Color), which is the only customization available in the free version of QR Reader, and presses on the voice Save to save the code. To share it with other users or save it in the Gallery of your device, press the appropriate button sharing and select the format in which you want to save / share the output file (SVG o PNG). Simple, right?

Other apps to create QR codes 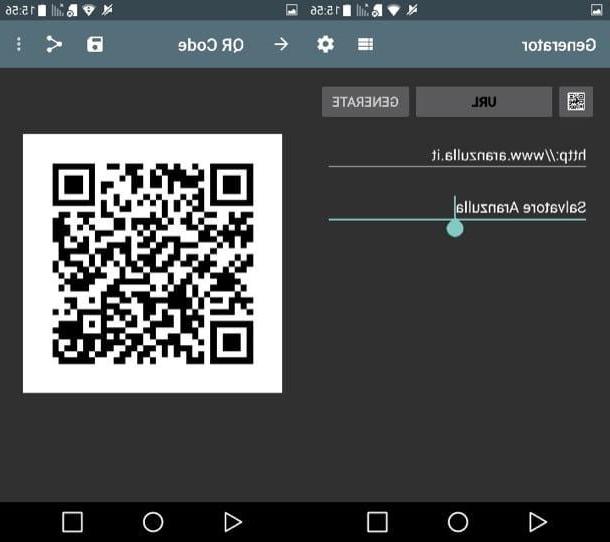 QR Reader is certainly not the only app that allows you to generate QR codes. There are many others that allow you to do this in an excellent way: here are some others that deserve to be taken into consideration.

How to create QR code

add a comment of How to create QR code